The department of Respiratory / Pulmonology deals with the diseases of the lungs and the respiratory system. It deals with the evaluation & management of acute & chronic respiratory diseases such as Asthma and respiratory allergies, COPD, ILD, Lung cancer, Auto immune disorders, sleep related disorders and chest wall disorders. The Department is integrated with the department of critical care in order to provide comprehensive care to patients requiring life support. A team of highly qualified intensive care specialists are available round the clock. Apart from the expertise the department is well equipped with the latest diagnostic & therapeutic technologies in the field of respiratory care and we have Best Pulmonologist in Faridabad

Video bronchoscope and non video fibrescopes with comprehensive gadget of accessories are available both for diagnostic as well as therapeutic purposes. On resolving radiological shadows, unexplained respiratory symptoms, blood in phlegm, foreign body aspirations, and lung cancer are some of the cases where these facilities are utilized.

Sleep studies are being done regularly for patients of obstructive sleep apnoea, obesity hypoventilation syndrome, disorders of excessive snoring and day time sleepiness .Facility for diagnostic as well as titration studies are a regular feature of department in a state-of -the-art sleep lab.

Education and counseling sessions are an integral part of outdoor services for smokers who desire to quit. The programmed rehabilitation programme offers graduated muscle exercises and training for those who suffer from confining respiratory ailments like advanced COPD and chronic respiratory failure.All type of lung and thoracic surgeries are being performed by an experienced team of thoracic surgeons at our institute. Comprehensive respiratory care involves the assistance of well qualified technicians &amp; dedicated chest physiotherapists. The Doctors are ably aided by a team of expert Paramedicals staff. The department is well staffed with a team of highly qualified and experienced pulmonologists.

Performed more than Thousand of bronchoscopies in a year without any major complication.
Performed and analysed many sleep related breathing disorders as well as parasomniac disorders
Successfully treated rare case of Pulmonary Alveolar Proteinosis due to Tuberculosis
Diagnosed and successfully treated rarest case of Lymphangioleiomyomatosis with Chylothorax (LAM with Chylothorax)

Interventional bronchoscopy in management of PTB 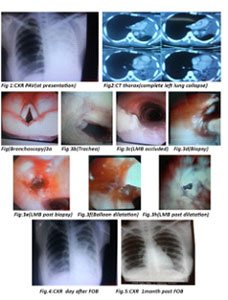 Abstract: A case of young postnatal female with endobronchial tuberculosis leading to complete collapse of one lung is presented. The patient did not respond even after 2months of ATT until the lumen of left lung was recreated and suppurative collection was drained by bronchoscopic intervention.
27 year old female presented with profound and persistent non productive cough, left sided chest discomfort, breathlessness on exertion and fever off and on. She had been referred by her primary care physician as she was not improving with ATT given for last 2 months. She had been suffering for last 3months. she had delivered her first baby 2 months back. Chest skiagram done a week after delivery was reported having left lung infiltrates. On examination there was diminished breathsound on left side chest. She maintained spo2 of 94% on room air. The routine labs were normal. Repeat CXR(fig 1) showed opaque left hemithorax with ipsilateral mediastinal shift.CT thorax(fig.2) confirmed complete collapse of left lung with cutoff of left main bronchus. In view of no response to ATT and progressive clinical and radiological worsening possibility of malignancy was considered. Bronchoscopy was advised for further evaluation.
Fibreoptic bronchoscopy revealed (fig 3 a,b,c,d,e,f,g,h) nodular and ulcerated mucosa from mid trachea to left main bronchus. LMB lumen was completely occluded by white slough covering the angry looking nodular,ulcerated and irregular mucosa. This being the reason of no ventilation in the left lung.RMB and right bronchial tree was normal in appearance.
The forceps was passed through bronchoscope and punch biopsies were taken. The granulation tissue was cautiously nibbled with the forceps.After some digging into the tissue a pinhole opening could be created. Balloon catheter was passed through the small opening and balloon was inflated multiple times. After several attempts the lumen could be widened a little. However bronchoscope could not be negotiated across this hole. Lot of pus like material was aspirated from left lung. Option of placing a stent was discussed with family if needed.
The bronchial washings were negative for AFB and culture was sterile. The biopsy revealed granuloma and caseation. Patient was continued with ATT. Oral steroid was given along with nebulised streptomycin and budesonide BID. She perceived significant relief in cough and defervescence of fever was noted.
Chest xray repeated next day (fig.4) showed partial aeration in left lung. She was discharged to home. Repeat CXR after one month follow up (fig.5) showed complete expansion of left lung. Steroid (oral and inhaled) was stopped as well as pyrazinamide (after 3months).
She is doing well after 4 months of therapy with no symptoms and completely expanded left lung.
Role of bronchoscopy is highlighted by this case as it not only established the diagnosis beyond doubt but also helped the drugs to work effectively there by converting a near treatment failure to successfull treatment of PTB in a caring mother. 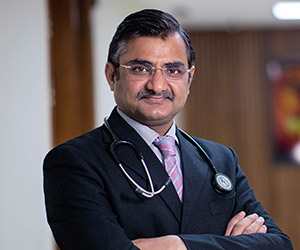 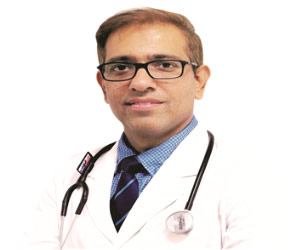 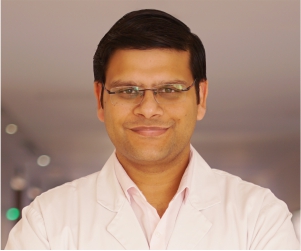