Rheumatology is the branch of medical science which deals with investigation, diagnosis and management of patients suffering from various kinds of rheumatic diseases and rheumatologists are the physicians who specialize in this field to provide care for patients suffering with such diseases Rheumatologists deal with mainly clinical problems involving joints, soft tissues and the allied conditions of connective tissues. There are more than 200 types of these diseases, including rheumatoid arthritis, osteoarthritis, gout, lupus, back pain, osteoporosis, and tendinitis. These diseases are one of the leading causes around the world of long-term disability. Arthritis, which causes painful inflammation and stiffness in the joints, is one of the most common rheumatic diseases. Though mostly chronic but many such diseases can have acute presentation and if not diagnosed and treated early, these  can be life threatening. Metro Hospital provides you the best Rheumatologist in Faridabad.

Osteo arthritis is the age-related degenerative disease of joints that results from breakdown of joint cartilage and underlying bones. Most common symptoms are joint pains and stiffness and these symptoms usually progress over the years. The most common joints involved are the proximal inter phalangeal and the distal inter phalangeal joints of the hands, knee and hip joints, neck and back.

This is a systemic autoimmune disorder that primarily affects the joints. Patient presents with early morning stiffness of at least half an hour, warm, painful and swollen joints. One fifth of patients develop lumps known as rheumatoid nodules under their skin. Usually, multiple joints are affected in a symmetrical pattern so joints on both hands, arms, legs and feet feel stiff, painful, and swollen at the same time.  This disease most commonly affects the middle age population. Females are affected more common than males with a ratio of 3:1. It also affects the other systems of the body mainly lungs and heart. Fever and tiredness may also be present. Often, symptoms come on gradually over weeks to months.

While the cause of rheumatoid arthritis is not clear, it is believed to involve a combination of genetic and environmental factors. The underlying mechanism involves the body's immune system attacking the joints. The goals of treatment are to reduce pain, decrease inflammation and improve a person's overall functioning. This disease can be very well controlled by cDMARDS, tsDMARDS and biologicals. Exercise and physiotherapy also play a role in maintaining the activity of patients.

Patients present with both skin and joint inflammation, may be simultaneously or at different times. The psoriasis causes red, raised areas and patchiness on the skin. The arthritis will usually begin between the ages of 30 to 50, but only one or a few joints will be affected.

This is a type of arthritis which generally affects the young male population (< 45years). These patients present with early morning stiffness of lower back, alternating buttock pain, asymmetrical joint pains and swelling generally of lower limbs. Some patients can have eye redness (uveitis), repeated urinary infections, heart involvement etc. This is an autoimmune disease with various genetic and environmental predisposing factors and usually starts from sacroiliac joints. Around 90% of patients have HLAB27 positivity. If not treated adequately and timely, it can lead to ankylosis of spine and permanent deformities of various other joints. This is treated very well with NSAIDs and various biologicals which are now available.

Gout is a type of arthritis that happens when you have too much uric acid in your blood and it forms sharp crystals in one or more of your joints. This usually happens in your big toe, but you can also have gout in your knee, ankle, foot, hand, wrist, or elbow.

Attacks are sudden and cause serious pain, often with redness and swelling around the joint. After the first attack, some people don’t have another one for months or maybe years. It is seen more commonly in men and that too usually after 40 years of age. Its incidence increases with obesity, alcohol intake, metabolic syndrome.

SLE commonly known as lupus, is an autoimmune disease which affects almost every system of our body. It usually affects young females in their fertile age group. The most common symptoms patient presents with are: intense fatigue, arthritis, fever, rash on face and body, photosensitivity, oral ulcers, hair loss etc. Lupus can present acutely or as a chronic condition. Sometimes patient remains stable and need minimal medicines but, in some patients, it can flare up very severely and can be life threatening. This should be diagnosed early and should be treated adequately by a rheumatologist. After clinical assessment, its diagnosis is confirmed by various blood tests. Number of antibodies are seen in blood of these patients such as ANA, anti-sm, anti RNP, anti-dsDNA etc.

This is an autoimmune disease which affects the skin and various other systems of the body. Patients are mostly young females and present with swelling of fingers, tightening of skin, change of colour of fingers and toes on exposure to cold (Raynaud’s phenomenon), abdominal discomfort after eating food, difficulty in swallowing food, ulcers on tips of fingers. Some patients can have lung involvement which further worsens the prognosis. Now there are various treatment options which can reduce the progression of the disease and improves the symptoms of the patients.

Various kinds of rheumatological illnesses when seen in children less than 16 years of age are categorized under JIA. These consist of various autoimmune diseases and their presentation is slightly different than adults. When these rheumatological illnesses start early in age, they cause more damage to joints and if not treated early and adequately, children develop various deformities of joints which hamper their growth and sometimes make them debilitated. So, children suffering from JIA have to be treated by a rheumatologist.

This rheumatological illness can have varied presentation. Most commonly patients present with extreme fatigue, joints pains, dryness of mouth, dryness of eyes, parotid swelling etc. if not treated early this sometimes can involve multiple systems of the body. This entity sometimes is overlapped with other rheumatological illnesses. Usually diagnosed by identification of SS-A and SS-B antibodies in blood.

Various categories of inflammatory myositis are diagnosed and most of them have specific antibodies for diagnosis. Broadly inflammatory myositis which was initially termed as dermatomyositis presents with: rash, arthritis, change in colour of digits on exposure to cold, difficulty in swallowing food, proximal muscle weakness (difficulty in climbing stairs, combing hair, getting up from the chair), lung involvement (ILD), etc. These diseases have to be diagnosed and treated early by a rheumatologist as they can be life threatening.

Anti-phospholipid syndrome, vasculitis, polymyalgia rheumatica, infective arthritis, other connective tissue diseases, fibromyalgia, osteoporosis and various other diseases which are usually missed by doctors, can be very well managed and treated by a rheumatologist. Metro Hospital 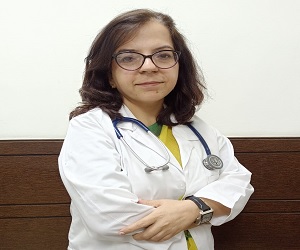